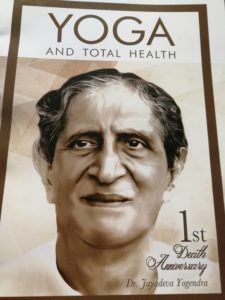 Dr. Jayadeva is dead. So the ordinary people say. But he isn’t. A Guru never dies. Since my last refresher at the Institute in 1985 I saw him only once, when he and Hansa have visited Germany. But nevertheless he was always in my mind and in my heart as lively and present as if I where sitting in front of him. Now he is seemingly gone, but still present to me as ever.

In 1978 I came to the Institute for the first time to start with my 6 month teacher’s training course. When I came from Santa Cruz Airport, it was a burning hot afternoon in June. After having dismounted from taxi I entered the compound and climbed up to the office door. There I saw him for the first time. He glanced at me in his typical manner. A mixture of aloofness, a bit amused and very warm-heartedly. He noticed a rather confused young individual from a northern country, tired, blind sided from all the strange impressions around him. He nodded to a tall man who was also in the office to bring me a tea.

This was his manner. He immediately conceived the personality of the people around him and acted accordingly. I was taken to my room at men’s hostel. At that times very few people stayed there sometimes. The following weeks I lived alone there. After having unpacked my suitcase I noticed, that there was no blanket under the mosquito net. Being still suspicious I thought: “What kind of hospitality is this? And no toilet-paper at the toilet too.”

So I moved over to the office and asked for these items. Very earnestly and friendly he handed me a woollen blanket and a roll of toilet-paper. “Only one?!”, I thought.

At the same evening at 10 p.m. I found out, that in June in Mumbai no woollen blanked is needed. Also the problem with the lacking toilet-paper was solved the day afterwards.

That was his kind, or I should rather say art of education. No reproof or critics. He gave the people the time and the chance to make their own experiences. I never saw him impatient. He took time to give answers to sometimes rather silly questions. He never argued. When his thorough answer was not appreciated, he looked at the person in a way shy and with an expression that says: “ O.K. find it out by yourself”. Sometimes he used to say: “Do a little thinking!”

In my case he recognized that I was a rather impatient, restless fellow not really fit for studying the scriptures the whole day. So he gave me some handiwork. He asked me to clear up the cellar of the men’s hostel. This was a world of its own, home of one million mosquitoes, who where pleased to make my acquaintance. So I cleared up every afternoon and dived deeply into the past of the Institute. I saw, how much energy founder put in his start at Versova Beach and how he worked to feed his family. I reported frequently to Dr. Jayadeva and he, very earnestly, appreciated. The both of us knew, that the only purpose was my education.

Sometimes a spiritual path is difficult. E.g. when old structures come to the surface. At such times, I went for long walks at Juhu beach. Once I was so angry, that the only thing I noticed there was dirt and shit. After returning to the compound he caught me and I told him of my “experiences”. He said: “I’m glad to find you in that condition.” And he immediately made time for a talk.

At another occasion, when the relation amongst us hostellers was very difficult, I told him, that I couldn’t stay any longer in this “ice cellar”. I was about to leave at the very hour for Shantivanam in South India. He asked me to wait, until he had worked out another schedule for me. Half an our later he came over to men’s hostel and handed it to me. One must imagine, the Guru came to the chela asking him to stay. Such was he.

He was very caring. Someday I sat on my glasses and broke it. He accompanied me for an optician somewhere in Santa Cruz, because he was afraid I might get knocked up by a car.

There are many other occasions I could tell. And all of it show his unique personality, his humbleness and his wisdom.

After completing my six months course he smilingly handed over the certificate to me with the words: “Now you are a certified Yoga expert.”

I am sorry to say, that I was not always able to follow his teachings. But after all after forty years I am still on the track. And there is rarely one day without an inner dialogue with him. Such is his impact for my life.